The sixth form funding rate has remained frozen at £4,000 per student, per year since 2013/14. This rate is below the funding given to 11-16s, and is insufficient to deliver high-quality 16-18 education. It's time to Raise the Rate.

Education funding for 16 to 18 year olds has been cut sharply since 2010. During that time, costs have risen significantly, the needs of students have become more complex and the government has demanded much more of colleges and schools. However, the national funding rate (‘the rate’) for 16 and 17 year olds was frozen at £4,000 per student, per year in 2013 (and was reduced to £3,300 per year for 18 year olds in 2014).

The sustained underinvestment in sixth form funding over the past decade continues to have a negative impact on the education of students, the financial health of colleges and schools, and the ability of government to achieve its ambitions for the economy and social mobility. The funding impact survey carried out by the Raise the Rate campaign in 2019 showed that as a result of funding pressures:

In the September 2019 spending round, the government announced that it would raise the rate to £4,188 per student from 2020/21. This is a welcome step in the right direction, but research from London Economics indicates that £760 per student is the minimum level of additional funding required to increase student support services to the required level (e.g. mental health support), protect minority subjects that are at risk of being dropped (e.g. modern foreign languages), and increase non-qualification time (e.g. extra-curricular activities, work experience). The cross-party Education Select Committee has also called for “a post-16 core funding rate raise from £4,000 to at least £4,760 per student, rising in line with inflation.”

The House of Commons produces and regularly updates a briefing explaining changes to funding over the years, which sets out clearly how costs have increased and available funds have diminished.

The Raise the Rate campaign (which is backed by the associations that represent schools, colleges, teachers, support staff, students and governors in England) would like to see the government make a clear commitment to increase the funding rate for 16, 17 and 18 year olds to at least £4,760 per student from 2021/22, accompanied by an annual rise in line with inflation. This should be in addition to, rather than instead of, a long term commitment to maintain the teachers’ pension grant and funding for high value/high cost subjects.

We need the support of school and college leaders, governors, students, parents, teachers and support staff to make the campaign a success.  There are lots of ways to get involved, for example: 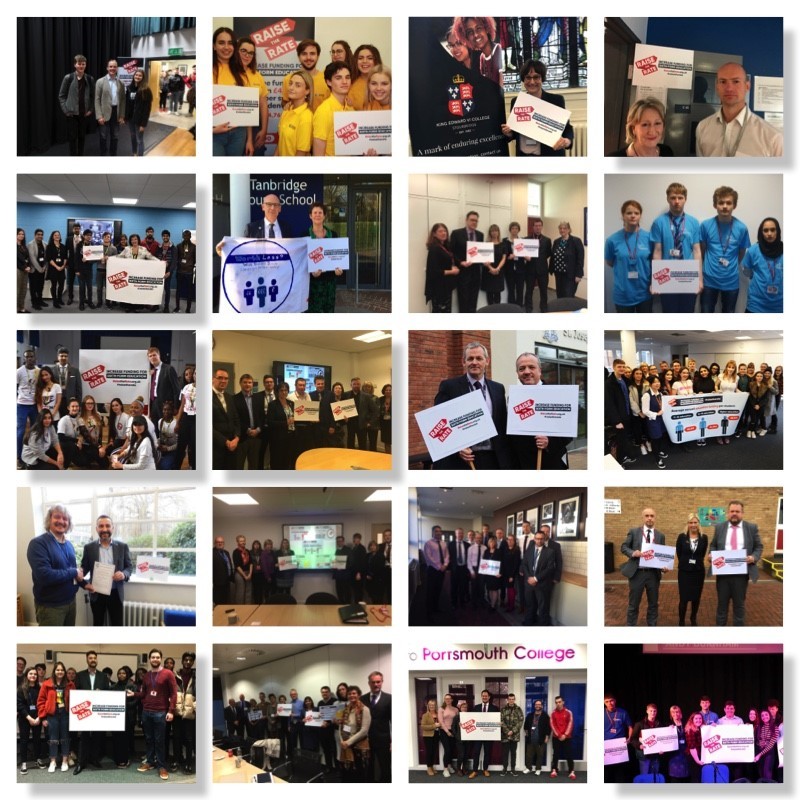 FE white paper: What do sector leaders want it to say? Tes

'Support for 16-18 is more important than FE reform', Tes

Halfon: FE must recognise ‘step forward’ in funding even if it’s not a ‘giant leap’ , FE Week

Williamson pledges to work ‘hand in glove’ with sector to argue for more funding, FE Week 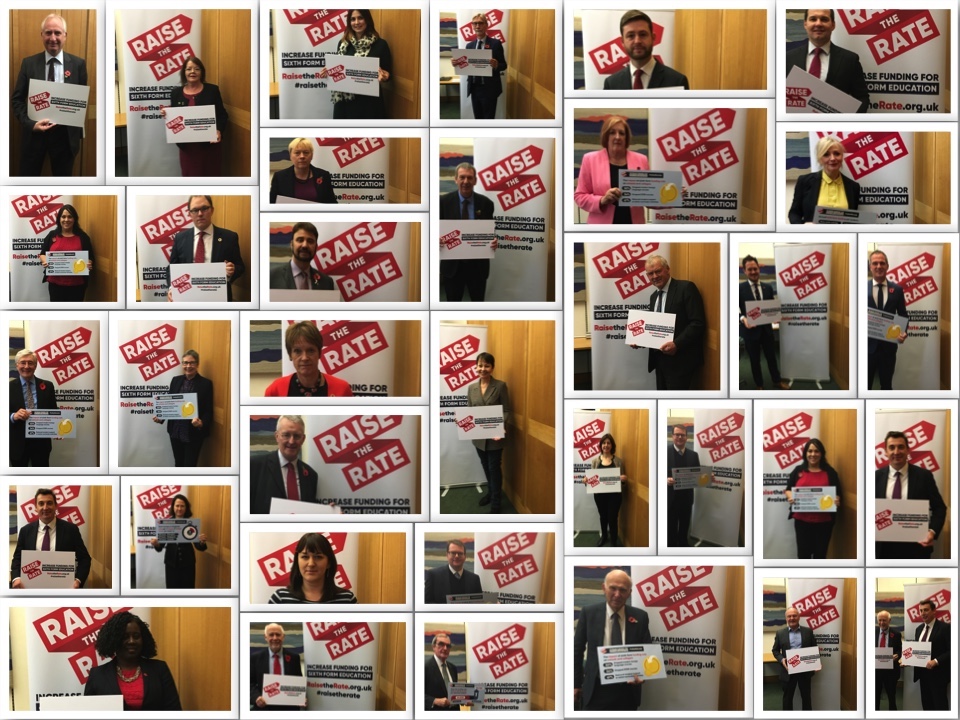 Why arts are vital to closing the skills gap, Tes

College funding: Which subjects will get £120m boost?, TES

Funding pledge leaves schools where they were 13 years ago – report , itv news

Funding pledge leaves schools where they were 13 years ago – report, BT news

Williamson’s bold claims of putting FE centre stage will be held to account – and what about adult learning?, FE Week

Wyke Principal Paul Britton on A Level Results Day sharing why it's so important to Raise the Rate, Sky News

French rocks — this is no time for schools to drop your ouis and nons, Evening Standard

Learning languages is about more than vocabulary tests – it gives you insight into a culture beyond your own, i News

Half of sixth forms forced to drop modern languages, Edexec

Minister says write to me about shortage of money, Henley Standard

Time is running out for Hinds on college funding, TES

Schools and colleges call on Chancellor to Raise the Rate, Schools Week

50 Broadway, London SW1H 0RG
Read here why the government’s proposals for Level 3 qualifications like BTEC will have a much greater impact on 16 to 18 education than this week’s FE White Paper: https://t.co/b37LblH0Pg
View on Twitter
Scrapping Btecs would disadvantage many young people and be disastrous for employers and social mobility too, argues the @SFCA_info's James Kewin https://t.co/7hPVQPzV6d
View on Twitter
Our final keynote, drawing a wonderful conference to a close, is from @talknewvic about how they think governors can play a key part in diversifying institutions and making them more equitable.
View on Twitter
A big virtual round of applause for Paul Joyce of @Ofstednews, who's just addressed our Clerks Conference with an update on inspection arrangements for this half term - monitoring visits only, mostly remote.
View on Twitter
Following on from @ofqual's response to the government's consultation on level 3 qualifications on Monday, @SFCA_info's James Kewin argues that removing funding for applied generals would be disastrous for employers, young people and social mobility https://t.co/JdmWVXVFR5
View on Twitter
It's obviously key in the world of #governance to stay up to date with legal issues and changes, and we're so pleased to have @ESeducationlaw with us to update us on the latest.
View on Twitter
Continuing with our workshop sessions, we're thrilled to have @LR6FC presenting on board diversity, @ICSA_News on managing board disputes, @RSMUK on managing risk, @BHASVIC on mental health, and @ESeducationlaw on academisation.
View on Twitter
Pleased to be part of the @SFCA_info Annual Clerks’ Conference with @fiona_chalk in 'The Clerk as Influencer' session #ETFSupportsFE https://t.co/dWM5Tjv6ZA
View on Twitter
We're hearing now from @AnnaCTTG and @fiona_chalk of @E_T_Foundation about the clerk as influencer - how to use your unique role to the best effect. Thought-provoking and really practical.
View on Twitter
The day includes workshops from a whole host of experts on #governance, including from the Better Futures MAT on clerking a growing MAT, @PeridotPartners on executive recruitment, and @CollyersHorsham on student voice in governance - and many more. Thank you so much to all.
View on Twitter
Looking forward to joining @SFCA_info this morning to discuss The Clerk as Influencer with @fiona_chalk of @E_T_Foundation #Governance #BoardofDirectors #SituationalIntelligence https://t.co/iNju933YIo
View on Twitter
Our annual Clerks' Conference is now underway, with a packed day of insights and practical advice on #governance ahead of us.
View on Twitter
Removing funding for the majority of applied general qualifications to aid the introduction of a binary model of A levels or T levels would be disastrous for employers, young people and social mobility, says @SFCA_info's James Kewin https://t.co/c2FVf1Yl6D
View on Twitter
Many of us are thinking about fostering academic resilience in young people at the moment, as we try to keep students engaged in their studies online, but this piece from @Eton_CIRL will also have huge relevance in 'normal times': https://t.co/iVHJXWukOm
View on Twitter
New on the blog this week from our partners at @B_I_Tweets, practical suggestions and thinking around how you can have the greatest impact on students’ wellbeing when you have limited time and resources: https://t.co/1rqbg1YsgR
View on Twitter
And a good strategy for starters is to ensure your auto-correct is set to English UK, not English US. "Practice" is the noun, "practise" is the verb!
View on Twitter
And it's always time for a re-read of @mfordhamhistory's thoughts on how to better set students up to practice writing academically at A level. It's about history, but will be of help to teachers and leaders across humanities and social sciences. https://t.co/JZjShflTTb
View on Twitter
Chief exec Bill Watkin welcomes @educationgovuk and @ofqual's consultation on summer 2021 exams and says: "Teachers know their students best and it is right that their professional expertise will be at the heart of the awarding process this summer." More: https://t.co/1nZX47YCeB
View on Twitter
This is such an important issue. AGQs are a vital part of so many schools and colleges post-16 offer and removing them will not solve any of the (perceived?) problems with the post-16 landscape https://t.co/iMxnaTWbwW
View on Twitter
Thank you so much to everyone who attended, spoke at, and sponsored our #SFCAWinterConf today - an inspiring and reflective day, and one that brought us together, if only virtually.
View on Twitter